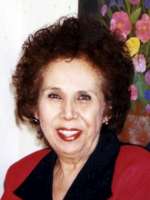 Gloria Delgado Zazueta, 71, lost her courageous five-year battle with ovarian cancer on March 2, 2011. Born on April 8, 1939 in Phoenix, Gloria was the oldest daughter of Alejandro and Maria del Carmen Delgado. She was a proud graduate of St. Mary’s High School in Phoenix and also attended Arizona State University. She married Humberto Zazueta and devoted her life to raising their five children, before returning to work at Los Olivos Mexican Patio for many years. She was preceded in death by her parents and her sister, Irma. She will forever be missed by her husband, Humberto, her loving children Dan (Dana), Nichelle (Joe), Maria, Candi (Shayne), Holli (Todd), her six grandchildren, along with countless other friends and family whom were blessed to know her. Gloria, who loved her family and friends with all of her heart, was also passionate about dancing, listening to her golden oldies, playing bingo and hitting the casinos. Visitation will be held on Sunday, March 6, 2011 from 4pm – 7pm with a Rosary at 6pm at Whitney & Murphy Funeral Home, 4800 E. Indian School Road. Funeral Mass will be celebrated on Monday, March 7, 2011 at 10am at Immaculate Heart of Mary Catholic Church, 909 E. Washington Street, Phoenix. Interment will follow at St. Francis Catholic Cemetery in Phoenix. The Zazueta family wishes to thank Hospice of the Valley for the compassionate care they provided to our mother.

Offer Hugs From Home Condolence for the family of ZAZUETA, GLORIA DELGADO