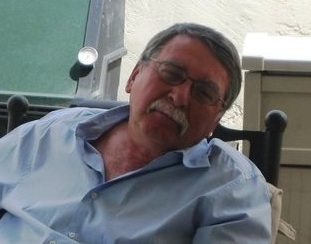 A new adventure awaits John Zeleny Jr., otherwise known as Tato, Dido and Johnny, who left this world on December 3, 2012. John’s adventurous life started in a post-WWII refugee relocation camp in Germany, born to his Ukrainian parents John Sr. and Katherine. John and his family immigrated on one of the last boats to come through Ellis Island. They settled in the Ukrainian section of New York City where he negotiated the lower east side, looked after his brother and sisters, and grew up in the halls of the Ukrainian Catholic School St. George. However, it was CYM (Ukrainian Youth Association) and McSorleys Old Ale House where he might have picked up most of his wise ways. In his younger days in NYC, John enjoyed and excelled as a dancer in the Genza Ukrainian American Youth Association touring Dance troupe. His up-bringing in the letter avenues of NYC made him a perfect candidate for the US Army. John, at the time a skinny kid, passed all the physical training and tests (beat out all the burley guys) to become a member of the Special Forces where he served proudly until 1972. It was after his discharge that his sisters and parents were then subjected to being woken up at 5:30 am to the song “The Ballad of the Green Berets”. After a visit to sunny Arizona, John and his wife moved to Phoenix, and their life became even brighter with the birth of their daughter Natalka Zeleny in 1980. Natalka was instilled with John’s love of education, adventure, travel and commitment to family and community, and he took great pleasure embarrassing her during her teenage years. She was the light in his life, and to the annoyance of many, he would brag and show pictures of her. Then, after his grandson Leo was born, he became “that Grandfather” carrying not wallet sized but 5 X 7 portraits of his grandson everywhere. John worked for Wells Fargo (First Interstate) for over 30 years where he became a devoted friend, prankster and joker to his fellow employees. When it came to possessions, John was a simple man that would love to brag about all his cars that would exceed 200,000 miles and would rather give away and donate his money to the Ukrainian Community and his family rather than purchase things for himself. In fact people always mentioned that John was a generous man. He freely gave away bad, good and inappropriate jokes whether you wanted them or not. He would help family and friends at a moment’s notice. He was an active member and gave his time and resources to the Ukrainian Community in Phoenix, AZ. John loved to be surrounded by people, and could be found where ever there was good food, friends and stories to tell. His parting words would always be “take care, be good, and don’t work too hard.” John Zeleny Jr. embodied what it was to be a good individual: kind, giving, nonjudgmental and never taking life to seriously, because in his words “you could get hit by a truck tomorrow.” He is survived by his daughter, Natalka Luba Zeleny, son-in-law Jeff Letey, grandson Leo Zeleny Nikoli Letey, and sisters Stephanie Zeleny, Luba Zeleny, & Catherine Zeleny.Services will be held at 10 am on Saturday December 8th at St. Mary Protectress Ukrainian Orthodox Church Kyivan Patriarchate 1102 N. 10th Street Phoenix, AZ 85006 and his life will be celebrated with a Retirement Party directly following the service at CYM (Ukrainian Youth Association Hall) 730 West Elm St. Phoenix, AZ. In lieu of flowers, please send donations to Ukrainian National Women’s League, 730 West Elm Street, Phoenix, AZ 85013.

Offer Hugs From Home Condolence for the family of ZELENY, JOHN, JR.