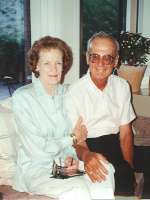 La Verne D. Zidnak passed away in the early morning of February 27, 2010, in Phoenix, AZ. surrounded by her loving family.
She was born on March 9, 1924 in Dunsmir, CA. to Mildred and Herbert Dabney.
In 1947 she married Dr. Pete Zidnak, Professor and Chairman of the Manpower Administration Department in the School of Business @ San Jose State University.
La Verne was an executive in the insurance and loan industry with California Financial Corporation, the parent firm of Security Savings and Loan Association where she was elected Assistant Vice President. In her 20 years with Security Savings she developed, coordinated, and managed complex insurance operations for both the home loan and mortgage industry, and held key titles in several of the Association’s affiliate and subsidiary companies.

Following Pete’s death, wishing to be in the company of her
beloved sister and brother in in-law, Betty and Newton Rosenzweig, she purchased a home in Phoenix.
La Verne was pre-deceased by her husband: Pete, her parents, and a brother: Allen Mudersbach. She is survived by her sister: Mrs. Newton “Betty” Rosenzweig of Phoenix, brother and sister in law: John and Kathleen Mudersbach of Cottonwood, AZ., several nieces, nephews, grandnieces and grandnephews.
Private services have been held.
In lieu of flowers a contribution may be made in memory of
La Verne Zidnak to Hospice of the Valley,1510 E. Flower Phoenix, AZ 85014 or the Tower Foundation of San Jose State University for the Dr. Pete and La Verne Zidnak/NCPGA Golf Scholarship Fund c/o San Jose State University Tower Foundation One Washington Square San Jose, CA. 95192-0184
Arrangements entrusted to Post Scripts by Posey and
Whitney Murphy Funeral Home. Phoenix, AZ.

Offer Hugs From Home Condolence for the family of ZIDNAK, La Verne D