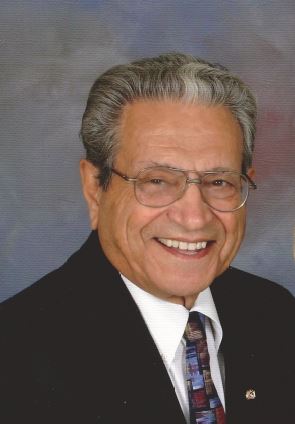 Frank Ziede, age 95, died August 15, 2018 at his home in Mesa with his family. Born June 13, 1923 in El Paso, TX and was brought to Arizona by his parents where he attended school until he graduated from Superior High School.   He joined the Army in 1943. After his basic training he volunteered for a special assignment and was sent to Burma, where he became a Ranger with Merrill’s Marauders in WWII. After he was discharged he returned to Arizona and went to work learning the retail grocery business.  Shortly after that he was given the opportunity to open his own grocery store in Scottsdale.  Later, he went on to open a wholesale produce company in Phoenix and a couple of years later he added frozen and grocery items to his line of products.  He was the first to start the processed foods business in Arizona.  His business serviced schools, hospitals, and restaurants in the Valley.  At the age of 70 he opened a Mexican food restaurant in Mesa, “Frankie Z’s”

Frank was known for his generous nature, fun loving spirit, and card games.  He never met a stranger or a day of hard work he didn’t love and always provided for his family.

He is survived by his wife Ann Ziede, his sister Mary Purnell, children Randy Ziede, Lisa Bryan (Greg), and Linda Chance (Conny).  He has 9 grandchildren and 16 great-grandchildren.  He is preceded in death by his son Jack Ziede.  Services will be held at Our Lady of Perpetual Help Catholic Church, 7655 E. Main Street in Scottsdale on Monday, August 20, 2018. A Visitation from 9:30 A.M. to 10:30 A.M. with the Funeral Mass beginning at 10:30 A.M.  There will be a mercy lunch immediately following the Mass at the Church hall.  Interment will be at St. Francis Catholic Cemetery.

In lieu of flowers the family is requesting donations to Hospice of the Valley and/or The Alzheimer’s Foundation.

Offer Hugs From Home Condolence for the family of ZIEDE, FRANK