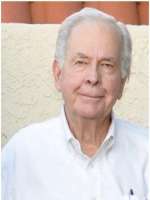 Chet E. Johns, age 77, passed away peacefully after a brief illness on March 15th, 2011. He was born on Nov 13th, 1933 in Phoenix to Chester Willis Johns and Genevieve Crockett Johns. He was the older brother to Richard Crockett Johns.

After 4 years in Tucson at the UofA as an Agriculture major and a member of Sigma Chi Fraternity he returned to Phoenix and his “sweetheart” Kay Diane James. They were married after their 5 year courtship and last December 28th celebrated their 55th anniversary.

Chet’s diversity of interests as a person were reflected in his accomplishments. Chet and his father farmed lettuce and cotton in the west valley by Luke Field and in Texas. Chet served as Chairman of the Board of Pesticide Control and as President of the Sheriffs Posse of Maricopa County. Chet served on and chaired the Arizona Racing Commission and was President of the Arizona Quarter Horse Breeders Association. Of note were his years as president of the Arizona National Livestock Show, an event he loved. A successful trainer and breeder of Quarter horses and Thoroughbreds. Chet and Kay had numerous State and National champions, winning race horses, futurity winners and a World Champion cutting horse in 1975.

Chet was an avid private pilot (getting his license and a plane on his 16th birthday) Yachtsman & Sailor (long time San Diego Yacht Club member), enjoying homes in Lake Tahoe and La Jolla, motorcycle enthusiast, cyclist, blacksmith, rock hound, art and antique collector, reader and humorist, all of which were done with great proficiency.
One of his greatest legacies was his omnipresence with his “sweetheart” Kay, his 2 sons and Grandchildren. Son: Chester Bryan Johns and his 3 sons Blake, Jeffrey and Trevor and son: Steven James Johns and his wife Kinga and their daughter Rachel and son Chet Steven Johns will ensure that his spirit will live on. An avid supporter of each and every endeavor pursued by them and his presence at a myriad of sporting events supporting them saw him touch many young lives.

Chet is survived by the aforementioned family members, and a host of other relatives of which we are all a part and the depth of our missing him will keep him within us. We love you and will miss you!

Your prayers in lieu of flowers are greatly appreciated.

Offer Hugs From Home Condolence for the family of JOHNS, CHESTER EDWARD